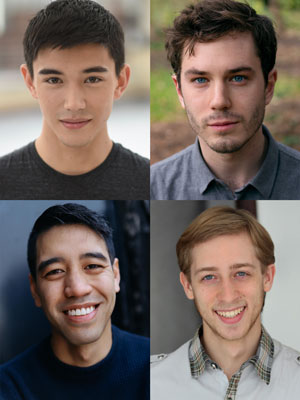 ABOUT THE PLAY: Mark, Finn, and Joe are juniors at Holy Apostle High, where religion class is not quite as interesting as their various crushes on teachers and each other. But there are deeper secrets bubbling under the surface, and when the boys learn about Catholic Mystics, Mark wonders if that might explain the strange things he’s been seeing and hearing… A show for anyone who has had a crush on a teacher, questioned the existence of God, or survived high school (preferably with soul intact).

CONNOR JOHNSTON (Mark) Connor’s theater credits include: Snow Falling on Cedars (Portland Center Stage), Neighborhood 3: Requisition of Doom (The Flea Theater), Rabbit Hole (Theatre with a View). Film/TV credits include NBC’s “Grimm” and CBS’s “Elementary” and supporting roles in the independent films, “All These Small Moments” and “Something Like Summer.” Connor is also funny and performs with his improv team, Microdose, around the city – @MicrodoseImprov. Thanks to Buchwald, CSM, Friends & Family. www.connorjohnston.com

BEN LORENZ (Mr. Teeson) Broadway: Three Tall Women. Other New York: world premieres of A.R. Gurney’s Ajax (NYT Critics’ Pick), and Sarah Gancher’s The Place We Built at The Flea Theater; 1969: The Second Man (Ars Nova: ANTFest); Breeders (Dixon Place); Houseworld (in a Greenpoint Rectory). More favorite roles include: Katurian in The Pillowman, Graham in Cleansed, Alan in Play it Again, Sam, Marty (and later Anthony) in The House of Yes, and Haimon in Antigonick. Film: Aletheia, Astral Migrant, Halfway to Concord, Now You Don’t. Ben studied literature and environmental science at Harvard, trained at the Atlantic, and spent a year teaching Shakespeare to the Brits at Eton College. www.benlorenz.com

ARTEM KREIMER (Joe) You may have seen Artem in Adam Rapp’s Wolf in the River or NYT Critic’s Pick Inanimate at The Flea. Other credits include Usual Girls (Signature/Columbia), Wicked Clone, Wrinkle, Boy Crazy Till the Day I Die (EST/Youngblood), Three Sisters (Columbia), Psycho Beach Party (Piper), Ariadne on the Island (Cutout), and A Doll’s House directed by Sam Gold (Williamstown). Aspirations include tax preparation for artists and owning a giant dog. www.artemkreimer.com